Home/Uncategorized/Pasture Recovery After Grassfire
Previous Next

The change that has occurred in the burned pastures of Southwest Kansas, Oklahoma, and the Texas Panhandle since March has been nothing less than spectacular.  The initial loss of livestock, wildlife, fences, buildings and homes is being replaced with the hope of this land returning to full production.

From a distance, you would never know a devastating fire moved through this area in March.  Pastures have become productive again.  In some ways, they are producing more useable forage than before.  But the land is still vulnerable, especially on the slopes. 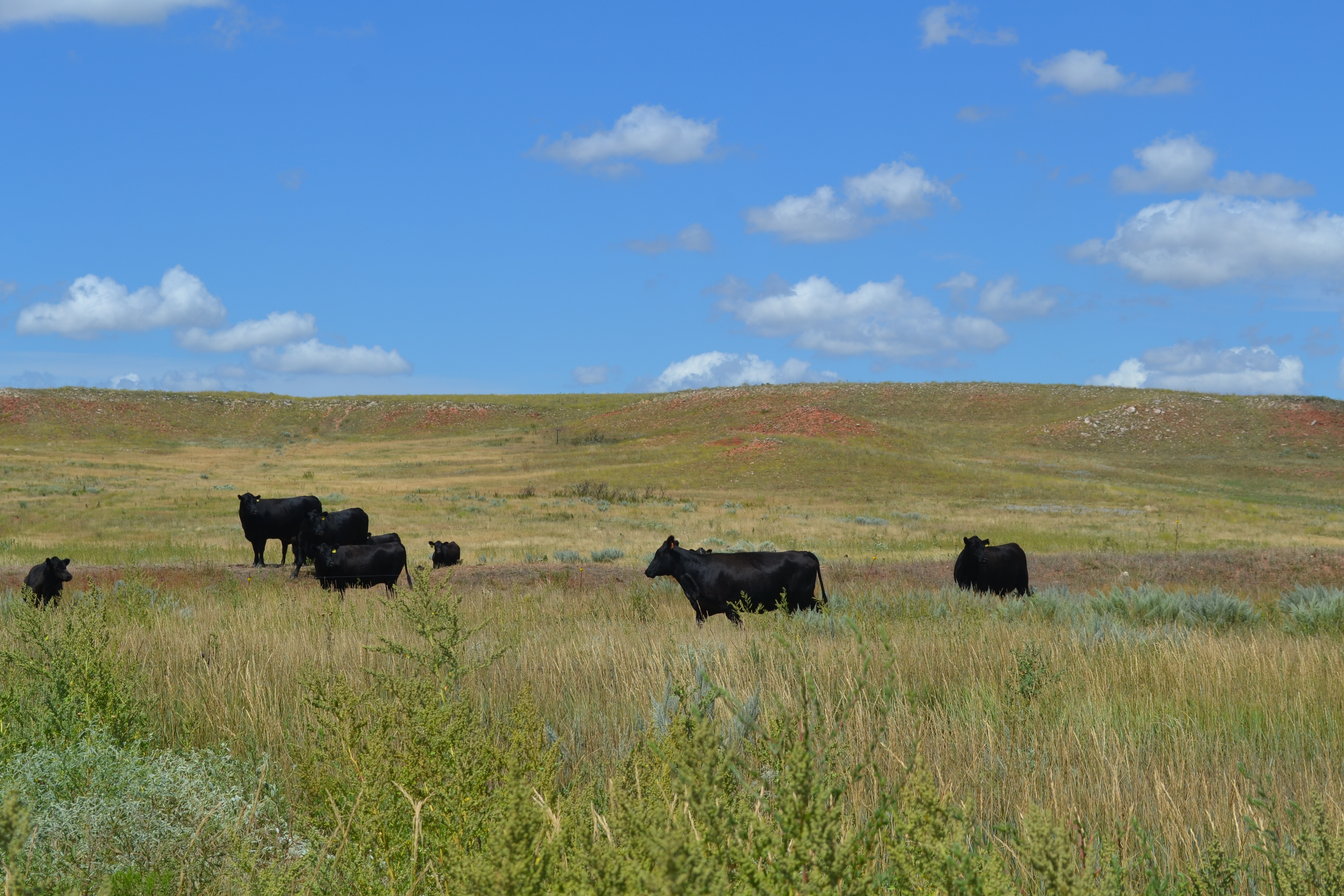 Cattle are a common site again in these pastures.  High quality forage is abundant. 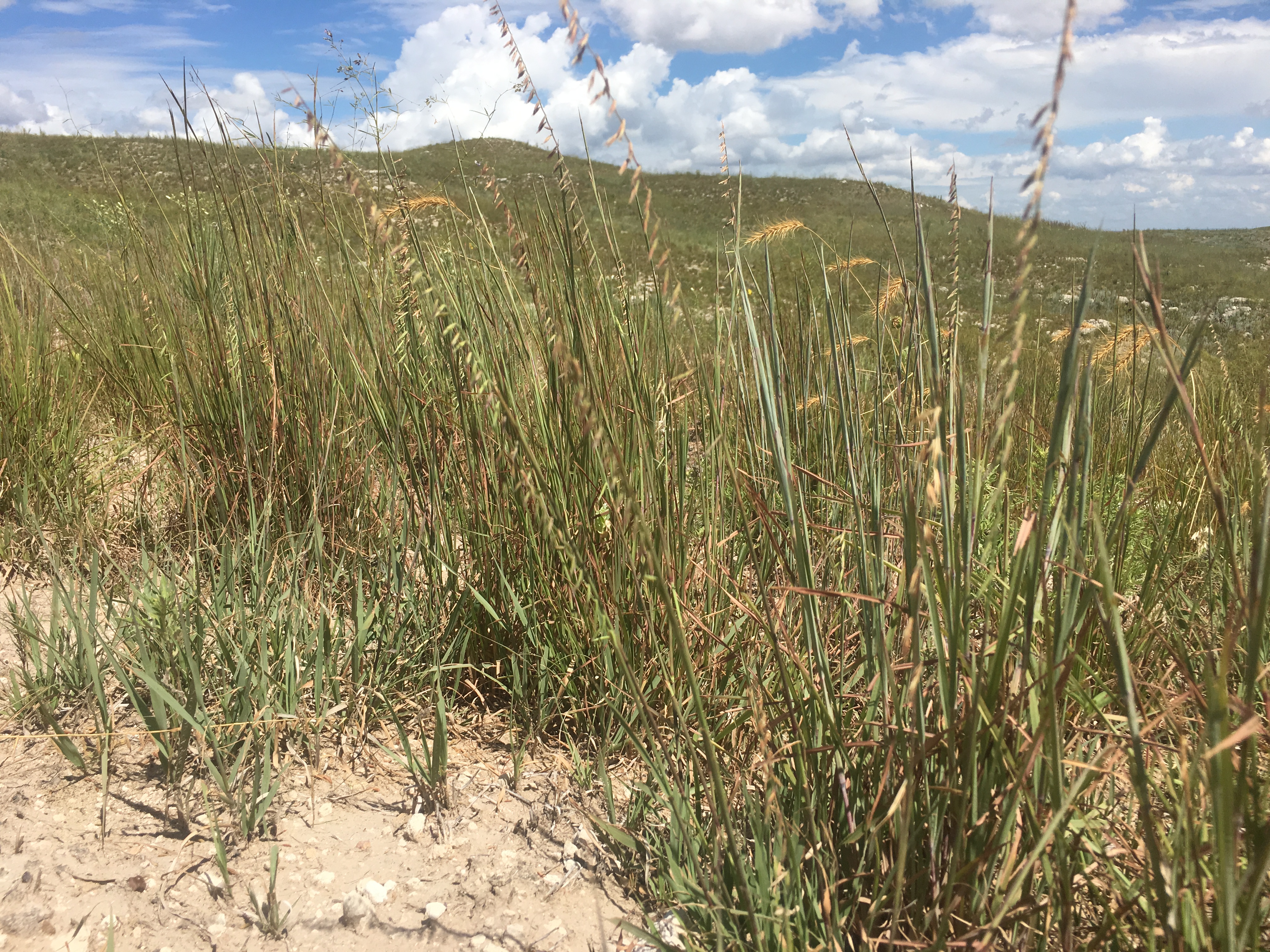 Grasses are seeding out, and continue to tiller.  We can expect the grasses to continue to increase over the next few years as the weeds naturally decrease.  In some areas, there may still be a need to help the grasses out by controlling the unwanted broadleaf species. 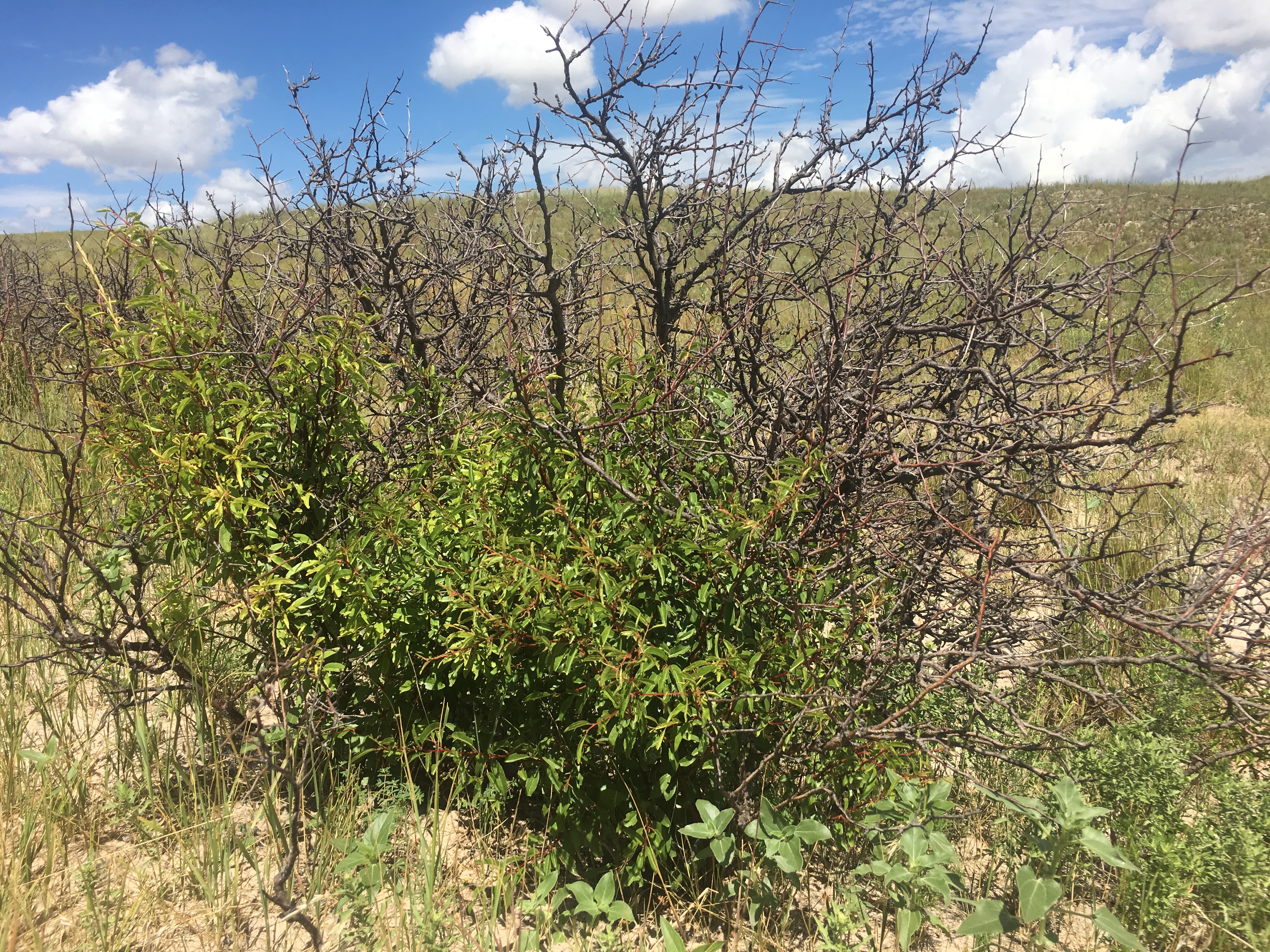 What appeared to be dead shrubs have started shooting up from the crowns.  Sandhill plums are returning. 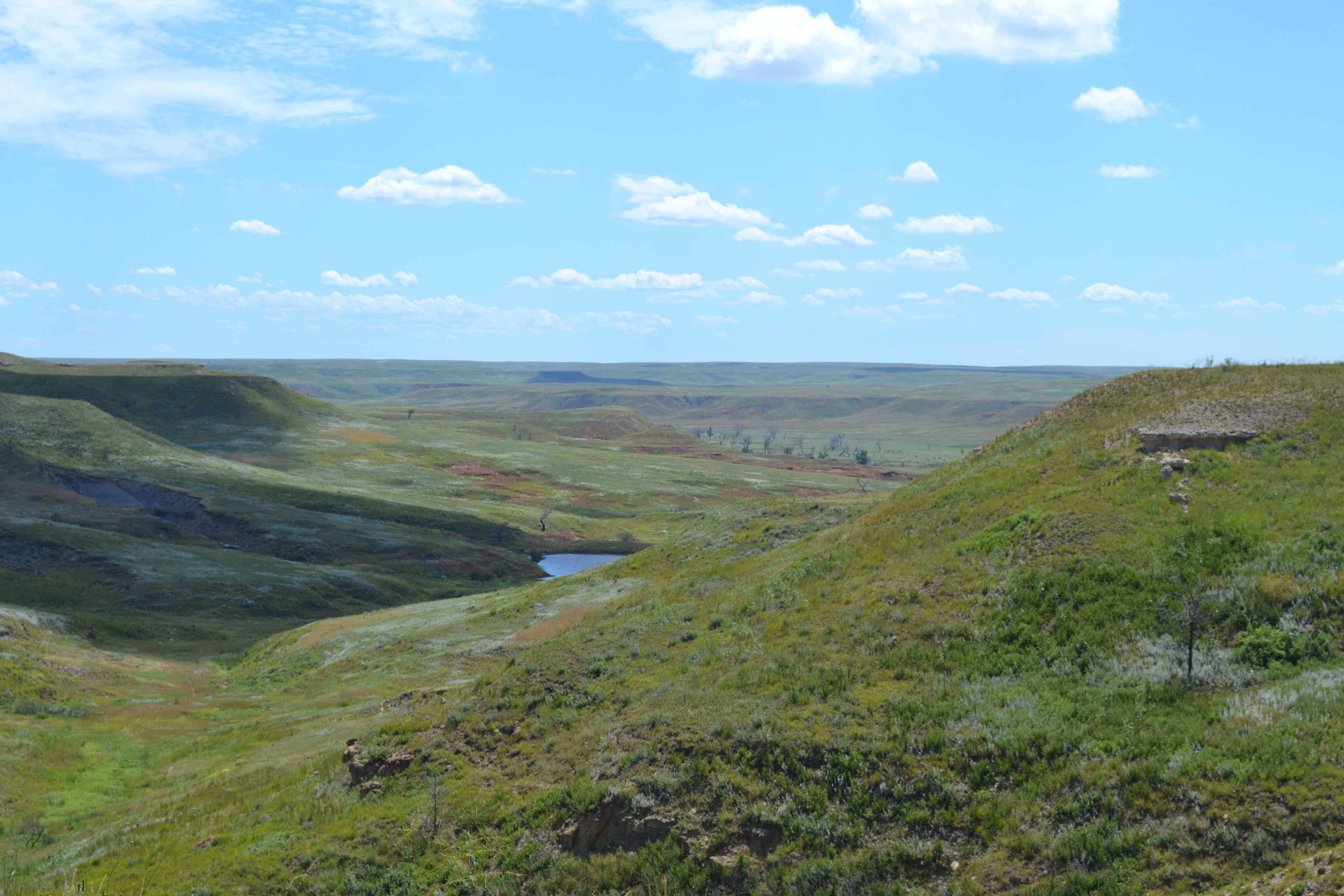 The Good Lord has blessed this land once again.

As we continue to follow the recovery of the burned pastures across the High Plains, it is easy to see that Mother Nature is working its magic.  These pastures are on their way to higher production than they were before the fires.  Complete recovery will still take a couple years, but productivity is already returning.  Cattle are beginning to graze again in certain areas.  Fence building continues to progress.  Ponds are full due to good rainfall.  The heat of the summer is just around the corner.  All the new vegetation should thrive just fine through the summer months.

Top photo taken on March 11.  Bottom photo taken on June 5.  What a world of difference three months has made. Circled in both photos is the same burnt tree.

Well above average rainfall has turned these pastures green!  A mix of grasses, forbes and weeds are growing everywhere.

Trees in some areas were completely killed by the fire.

Some trees are recovering from the fire, while others were completely killed.  Control of Red Cedar will be a long-term benefit to these pastures.

Grama grasses are highly nutritious for livestock, as well as wildlife.

Grama grasses are heading out and flowering.

Recovery of these burned pastures has been dramatic and quick due to favorable weather conditions.

Aerial view of the recovery – only three months after the fire!  Rains have filled ponds and creeks as well.

The rate of recovery would have been a lot slower if it wasn’t for the high rainfall in April and May.

Cattle are beginning to graze on these pastures once again.  Stocking rates will need to be monitored closely so over grazing does not occur, and allow these pastures to head into next year strong.

Frequent and timely rains are causing a huge growth spurt across these burned pastures.  Grass is growing well, and in some areas, may be ready for grazing soon.  Without the timely rains, recovery would be much slower than what we are experiencing.

Both forbs and grasses are growing alongside each other.  Most of the forbs in these pastures are perennials.  Although many are not desired by livestock, forbs do play an important part in the ecosystem.

Buffalograss is already growing very well.  Stolons, or runners are helping to cover the ground.

Wildflowers are adding to the beauty of these pastures.

Fence building has a long way to go, but progress is being made.

Electric fencing is adequate for now, until permanent fences are built.

Some timely rains are bringing life to the burned pastures.  As is typical in the spring, the weather fluctuates wildly.  Warm days with a strong south wind are followed by cool days with a strong north wind.  But, temperatures are trending up, and regrowth is coming in earnest.  At least in spots.A good amount of bare soil is still visible across the landscape, especially where there are rock outcroppings or gravel soils.  You can already see the difference in soil textures and soil quality.  The lower valleys are greening up nicely.  This is a combination of better soils, and better soil moisture.

Wind erosion continues to be a major concern.  It doesn’t take a strong wind to stir up the dust.

But surprisingly, the dust storms are not as bad on the pastureland as they are on the tilled land.  Small dunes of sand are visible in the pastures, but not near to the extent of the soil movement in the tilled fields.

We were fortunate that the recent rains came gently, and so far, there are no major signs of water erosion carving new gulleys into the slopes.

Both perennial grasses and the perennial broadleaf plants are putting out new shoots from the crowns or underground rhizomes.  Just like newly emerging wheat, it is hard to see from a distance just how many new shoots have already emerged.  Once these new shoots get a little height to them, and tiller out a little more, we will see a profound change from mostly soil to mostly green plants.  Many of the pasture grasses are warm season grasses, so we are still waiting for warmer days to allow these grasses to grow in earnest.

Sagebrush is typically very susceptible to fire.  We would expect a significant reduction in the amount of sagebrush, if it was prevalent.  Reduction in Red Cedar should be significant as well.  Unfortunately, there is not much sign of life in the sandhill plum thickets.  The yucca are trying to shoot out new leaves from the charred growing points.

The recent rains have come at a much-needed time and brought great hope to many ranchers and landowners.  We’ll continue to see more significant growth and healing, if April brings some timely showers as well.

Beginning on March 6, the High Plains experienced devastating fires that burned over a million acres of grassland across Kansas, Oklahoma, Texas and Colorado.  Friends and neighbors have been greatly affected by these events.  We grieve for those who lost their lives trying to save their cattle from harm.  The pictures of destruction are sickening to see.  The immense loss of cattle, structures, fences, wildlife and vegetation is overwhelming.

Immediately after the fires died down, an outpouring of goodwill and kindness started flowing in from all over the country as people show their neighborly love to pull together and begin the process of rebuilding what has been lost.  The scars won’t go away quickly, but they will heal.

In all things, there is hope.  And we are about to witness that hope as the land begins to heal itself.  We all see fire as destructive, but it can also refine and purify.  We want to focus on the good that is going to come because of these fires.

Just mere days after the fires, signs of new growth had already begun.  New sprigs of grass started poking through the black ash.  With just a few timely rains, these desolate areas will become green with new life in a hurry.

For centuries, fire has been used as a pasture management tool to improve grass production and subsequently increase gain in cattle.  It is just a matter of time, before these pastures will be more productive than they were prior to the fires.  Weeds, scrub bushes, and unwanted trees have been reduced in these pastures.  The perennial grasses will spread much quicker with less competition.

That doesn’t mean that we are out of the woods yet.  Blowing and drifting sand are prevalent right now.  These areas may be slow to recover, and could change the landscape forever.  But nature will heal even these areas in due time.  What the land needs more than anything right now are timely, soaking rains.  That may or may not happen across this arid region.  The rate of recovery will have more to do with the upcoming weather than anything we humans are capable of.

Our goal for this blog is to look forward to what is to come.  We will catalog the progress of the recovery; where we will point out the progress, the challenges, and any reclamation solutions along the way.

For those who live in the midst of this devastation, time will appear to stand still and progress will seem slow.  But progress will happen.  We hope that we at Crop Quest can supply those that have been affected by these fires with at least a little information that may be useful as we all watch this land heal.

For anyone directly affected by these fires, we would be glad to help answer any questions that you might have related to plant and soil conditions.  We sure don’t have all the answers, but we are very willing to offer our help in any way we can.  620-225-2233